The Fed Makes a Minor Move

The Federal Reserve left short-term interest rates alone at its January meeting, but it did make what Fed chairman Jerome Powell called a “small technical adjustment” in view of its continuing purchases of Treasuries. Wednesday, it slightly increased the interest rate paid to banks that park excess capital reserves at the Fed.

The move may give the Fed a bit more control over short-term rates this quarter and assist the operations of U.S. financial markets.

Rising to 131.6 in January, the Conference Board’s Consumer Confidence Index reached its highest level since August. Consumer spending increased 0.3% in December, according to a new Department of Commerce report.

Economy Expanded at a 2.1% Pace in Fourth Quarter

The Bureau of Economic Analysis released this estimate Thursday. That number matches the gross domestic product of the third quarter and affirms that the U.S. avoided a fall slowdown.

Friday: The Department of Labor releases its January employment report. 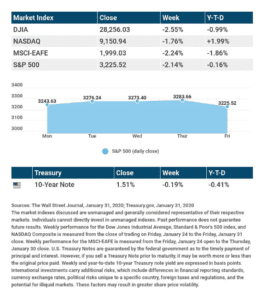