Trade continued to dominate the news last week and cause market volatility as investors monitored discussions of the North American Free Trade Agreement (NAFTA) and tension with China. While Mexico and the U.S. reached a new trade deal early in the week, talks with Canada stalled on Friday, August 31. Reports also came out that President Trump may be adding tariffs on another $200 billion in Chinese goods.

Domestic markets increased for the week and ended August in positive territory. The S&P 500 and Dow each had their best August since 2014—while the NASDAQ’s 5.7% growth was its best performance for the month since 2000. On Wednesday, the S&P 500 reached a new record high. For the week, the S&P 500 gained 0.93%, the Dow added 0.68%, and the NASDAQ increased 2.06%. International stocks in the MSCI EAFE joined the growth, adding 0.26%.

Key Data From Last Week
Although trade might have dominated headlines, last week provided a number of informative economic updates, including:

• Personal incomes grew in July.
The 0.3% increase fell slightly short of the projected growth but is still up 4.7% since this time last year. Combined with growth in personal consumption, this data indicates that consumers had a solid start to the 3rd quarter of 2018.

• Gross Domestic Product (GDP) was higher than initially thought.
The 2nd reading of GDP expansion between April and June was 4.2%, higher than the initial reading and still the fastest economic expansion since 2014. Economists don’t believe this pace is sustainable, however, as rising interest rates, ongoing trade tension, and fading tax-cut benefits could slow growth later in the year.

This week’s performance and reports once again underscore a message we have frequently shared with you: Instead of focusing on the headlines, pay attention to the fundamentals for a clearer understanding of the economy. If you have questions about how this data affects your financial life, we’re here to talk. 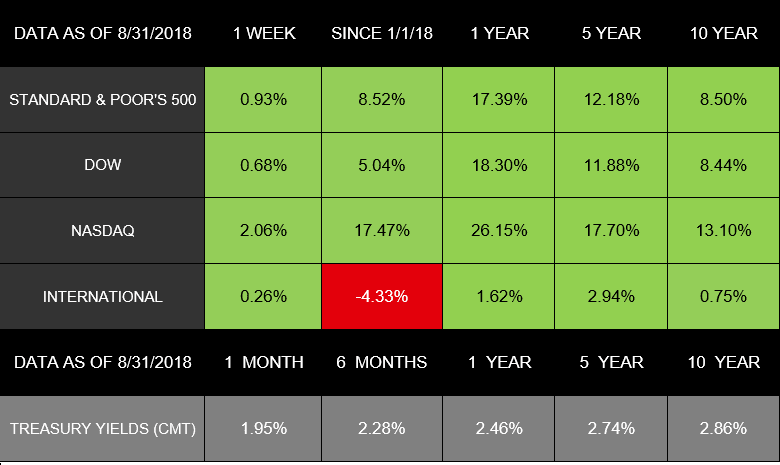 Notes: All index returns (except S&P 500) exclude reinvested dividends, and the 5-year and 10-year returns are annualized. The total returns for the S&P 500 assume reinvestment of dividends on the last day of the month. This may account for differences between the index returns published on Morningstar.com and the index returns published elsewhere. International performance is represented by the MSCI EAFE Index. Past performance is no guarantee of future results. Indices are unmanaged and cannot be invested into directly.