Friday, the S&P 500 settled above 3,000 for the first time, after rising 0.78% for the week. The Dow Jones Industrial Average chalked up a milestone of its own: the blue chips ended the week above 27,000, gaining 1.52% on the way. Additionally, the Nasdaq Composite wrapped up the week 1.01% higher. The MSCI EAFE index, a gauge of overseas developed markets, fell 0.65%. Stocks rallied at midweek with help from Federal Reserve Chairman Jerome Powell’s congressional testimony on monetary policy, plus the latest Fed meeting minutes.

Jerome Powell’s Statements
Wednesday, Chairman Powell told Capitol Hill lawmakers that “uncertainties around global growth and trade continue to weigh on the outlook” of the Federal Open Market Committee. He also noted that “manufacturing, trade, and investment are weak all around the world.”

On the same day, the Fed presented the minutes of its June policy meeting. The record shared the belief of some Fed officials that “a near-term cut in the target range for the federal funds rate could help cushion the effects of possible future adverse shocks to the economy.”

Currently, the Fed has a yearly inflation target of 2.0%. In the past, it has often raised interest rates in response to increasing inflation, which can potentially slow growth and affect hiring and employment levels. Absent significant inflation pressure, such a response may not be forthcoming.

Final Thought
All eyes are on corporate earnings this week, as prominent banks and about two dozen other S&P 500 firms report second-quarter results. Market participants have much to consider in terms of profits, revenue, and guidance.

THE WEEK AHEAD: KEY ECONOMIC DATA
Tuesday: Fed chair Jerome Powell delivers a speech on monetary policy at the G7 summit in France, and the Census Bureau releases its June retail sales report.
Friday: The University of Michigan presents its preliminary July consumer sentiment index, measuring consumer confidence and perceptions of the economy.

Source: Econoday / MarketWatch Calendar, July 12, 2019
The Econoday and MarketWatch economic calendars list upcoming U.S. economic data releases (including key economic indicators), Federal Reserve policy meetings, and speaking engagements of Federal Reserve officials. The content is developed from sources believed to be providing accurate information. The forecasts or forward-looking statements are based on assumptions and may not materialize. The forecasts also are subject to revision.

Source: Zacks, July 12, 2019
Companies mentioned are for informational purposes only. It should not be considered a solicitation for the purchase or sale of the securities. Any investment should be consistent with your objectives, time frame and risk tolerance. The return and principal value of investments will fluctuate as market conditions change. When sold, investments may be worth more or less than their original cost. Companies may reschedule when they report earnings without notice. 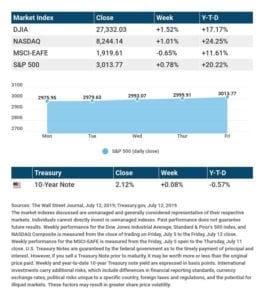